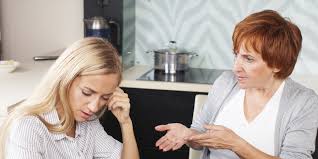 Are you aware that no matter how juicy or rosy your relationship is, a mother in-law is capable of scuppering your happiness day-in-day-out if not successfully tear you two apart. Obviously, she is not the one you are getting married to but you dare not risk having a “bitch, or witch” as a mother in law. The end is near from far for such.

Although, an head – head tussle might not be something worthwhile considering the status of the mother in question as well as the value the ward placed on her. Here are few clues to detect them and who they actually are before crossing their path.
At the spot of any of the aforementioned sign, flee for your life is at risk (if the situation is more than you can manage) May God grant you a good mother in law
relationship