12 Cogent Things that Have Happened to Nigeria after the Demise of Chief M.K.O. Abiola 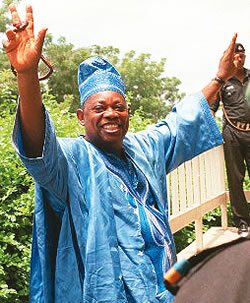 As celebrated today in Nigeria- the 12th day of June 2017, marks the 24th year that the late global figure, powerful businessman, philanthropist and politician named Moshood Kashimawo Olawale Abiola popularly known as Chief M.K.O Abiola contested for The Presidency in 1993. It was indeed a day worth remembering for Nigerians who massively voted for Abiola to rule the nation but surprising an unexpected occurred.

The day that should have been a day of celebration for Yoruba folks and Nigeria at large later turns out to be mere history as we speak without any official note that Chief M.K.O once ruled the nation, Nigeria at a particular time. History reveals that General Ibrahim Babangida's administration reportedly annulled the election for reasons best known to him. During this period, all efforts by Chief M.K.O to be reinstated as the winner of the election was futile regardless of his international connections.

READ ALSO; Why Ijebu-Ode Will Not Experience Desired Development Anytime Soon
Eventually, he was imprisoned on a treasonable charge for declaring himself as President at Epetedo area of Lagos Island (since Efe Nwosu - the then NEC chairman was incapacitated to make such decision). As long as he spent 4years in the prison custody, with several awkward treatments. Alas, he lost his life on the 7th of July, 1998. At the declaration of his death, a lot of people (citizens from far and near) follow suit for the sake of June 12 1993, election.

However, its been a long year to this time (decades) leaving Nigeria with a lot of memories - worries, pains and agony to mention but a few. Invariably, a whole lot has happened after the demise of 1993 people choice President of Nigeria.

The 12 cogent things that have happened to Nigeria after the demise of Chief M.K.O. Abiola are as follows;
READ ALSO; Reactions to Okupes Notion on Why Osinbajo Must not Contest Come 2019

POINT ONE
The crazy democracy of 1993 who annulled the election of M.K.O remains the practice of Nigeria as a nation. Due to constant pressure on General Babangida, he left the seat of GCFR for Ernest Adegunle Oladeinde Shoneka (who reigned as an interim President for three month) who was later toppled by the ferocious and fearless late military leader General Sani Abacha. At the demise of the LORD, return to democracy was realistic for Obasanjo's case. Since 1999 till date, democracy lives on.

POINT THREE
Social problems affecting Nigeria and her development have grown wings from the dawn of time till date. Poverty, unemployment and increasing crime rate been the frontliners of the nation's challenge from earliest time have taken a twist leading to new dimensions and increasing rates. Trending dimensions of social problems are Kidnapping for ransom, Kidnapping for ritual, Rape of the Elderly, Boko Haram Insurgencies, Fulani Herdsmen and lots more.

POINT FOUR
Substandard state of existing social structures. All the existing basic social structure (polity, religion, education, economy and family) today is marred with lots of ups and down.

POINT FIVE
Discrimination and marginalisation thrive on in Nigeria. This is noticeably based on the allocation of favoured position to one zone ahead of others. Another pointer to discrimination and marginalisation in Nigeria is the long cry for independence by the Independent People of Biafra (IPOB) under the current stewardship of Nnamdi Kanu. Another rationale for discrimination is noticeable when a group of Northerners gave a notice of October 1st for Igbos residing in their region.

POINT SIX
Economic stagnation (if not retrogression) at the national level is the reality of Nigeria today. The dependence on the monopolistic product "Oil" has left the nation in a redundant state due to global relations and others. Another pointer to the economic stagnation is the havoc wrecked by past administrations (quoting APC government) as well as the lack of efficient and appropriate manpower holding the position of power today.

POINT SEVEN
FGN at all level - federal and state government lives on with massive debt regardless of the Paris bailout funds received and distributed to necessary quarter.

POINT EIGHT
Hope for Nigerians championed by Chief M.K.O Abiola remains a mirage in present time. There is no hope for average Nigerian youths and old folks regardless of their educational background and qualification. Since unemployment and poverty thrive on while the economy remains unfavourable to all and sundry. HOPE for Nigerians today remains worrisome due to past glory.

POINT NINE
The standard of living of an average Nigerian man remains at a low ebb today since economic stagnation hits the nation hard.

POINT TEN
Cost of living for an average Nigerian man remains at a low ebb today because of the massive effects of exchange rates (since most goods are imported), economic recession and inflation rates to mention but a few.

POINT ELEVEN
Prior the arrest of Chief M.K.O Abiola, he was one of the richest businessmen in Africa and at home while the current business mogul Aliko Dangote was far from reach. As at this day, Dangote products (cement, sugar, flour, rice, spaghetti, pasta) have gained wide reach and acceptability leaving him as one of the formidable business moguls in Nigeria, Africa and the World in general.

POINT TWELVE
Corruption thrives on in Nigeria as exposed by relentless efforts of Buhari government.


#June12 spirit lives on, be mindful of your activities today.
education politics