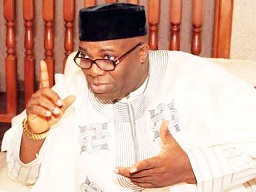 Quoting naij.com, Doyin Okupe the former Senior Special Assistant on Public Affairs to former President Goodluck Jonathan (2010 - 2015) of Nigeria noted that Vice President Yemi Osibajo should not contest come 2019 if Buhari dies. He said the current Acting President (while the President-elect undergoes medical treatment abroad presently) should not vie for The Presidency come 2019 for the sake of the Northerners.
Okupe's stand is based on the way and manner Zoning principle is highly respected and strictly followed in Nigeria's politics but certain circumstances beyond human control have often truncated such plans. For instance, incapacitation as a result of ill-health which can later lead to the demise of the Mr President is a serious issue. When such cases arise, constitutionally all power shifts gears to the Vice President.

RELATED; Administration of KING JON BUH - Reactions and Criticisms
The first experience Nigeria had under the reigned of late President Umar Musa Yar'Adua almost tore the nation apart because the Vice President  (Goodluck Ebele Jonathan) in question was from the minority group. In the view of Okupe, a replica of what happened to late President Umar Musa would only make Northerner's feel cheated but on a realistic note, it is a natural mystic. I wonder why he would make such a declaration forgetting the fact that everyone who possesses the expected criteria (regardless of her zone) - age, educational qualification, link to one registered political party, has the right to vie for any post including the Presidency. Come 2019, should Osinbajo feels like running for Presidency #Goodluck

On another note, the Northerner's slogan "born to rule" seemed to be the prominent issue affecting true democracy and federalism in Nigeria. They have ascribed so much love to be the arrow head of the nation, savouring the love with the Southerners and fencing the Easterners as if they are aliens. Without being sentimental, people from any of these geopolitical zones - South South, South West, South East, North Central, North West, and North East should experience equal treatment as electorates and voters in the name of ensuring Nigeria develops at all cost.


READ ALSO; Democracy Day Celebration in Nigeria - Flashback till Date
However, when a multi-cultural nation (like Nigeria) operates with nepotism and favouritism as its ideology in all realms, its desired development would seem unachieveable because the goal is not general but rather specific in the real sense.