Why Nigerians Need to Change Their Perceptions about Hotels

For a people easily split into Northerners and Southerners, Nigerians can still be held together by their sense of morality and religiosity. The genuineness of this though is a subject for another day, but in my casual observation, there is a taboo that seems to be attached to the hospitality industry with men who check into hotel rooms, considered straying husbands, and women seen with hotel room keys as unfaithful wives. What is worse is if you are a young girl, I do not have to say what already pops up in your head. And for young Nigerian boys, the tag of being a cyber-criminal doesn’t come off easily.
Or he may be on business from another state, and since his flight is not until the next morning it only makes sense to check into a hotel for the night.
Or that a young female who also happens to be a software developer needs an accommodation in Ikeja for the weekend where she can work uninterrupted and where there is 24 hours electricity and internet service that is very good.

READ ALSO; Innovations Sustaining Nigerians Today, Diminishing Values in Returns
There are many valid reasons why people could book a hotel, and it rarely has to be sinister or filled with ulterior motives. Hotel owners and managers have in the past attributed the low patronage of their business to this mentality among Nigerians. “White people don’t think like that”, says an hotel manager who chose to remain unnamed. “They come in here for business or sightseeing, it's normal for them over there, nobody is raising eyebrows or calling their Pastor to report them. But here in Nigeria, we have the mentality that if a man is checking into a hotel he is lodging with his girlfriend, he is unfaithful to his wife. If a woman does it, then she is a shame to her husband”

It would also be necessary for people to be aware that like going into a restaurant to eat, or like taking the kids to an amusement park or taking a significant other to a fancy date, checking in to a hotel room for the weekend is also a good way to treat yourself. And we should try it sometime. Clean sheets, hot running water, satellite television, room service, internet access all these at affordable rates. Take a central place in Lagos like Ikeja for example where the competition is high, there are lots of cheap hotels in Ikeja that provide these to their guests. 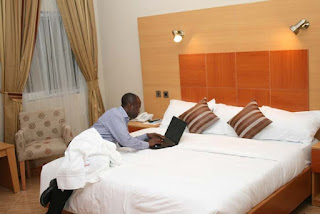 “Nigerians work so hard for their money, I don’t see why anyone would want to judge someone who goes for a weekend getaway in a moderate hotel or a resort, just to relax himself. You don’t even have to go with anyone. I do it sometimes and switch off my phones because I don’t want disturbance. And with time, I find that it is good for my health”, says Sunday Oriaku who is a businessman who imports building materials from China.

Moreover, hotels provide more than just accommodation. They often cater to business travellers and businessmen by having conference rooms and business meeting rooms in their buildings. So where their conference room is booked for a week-long seminar that brings people from all over the country, it only seems the wise thing to book rooms in the same hotel or a nearby hotel for the sake of convenience.

MUST READ; Entrepreneurial Options for Making 2017 Count in Recession Period
It may take a while, but we may eventually get there. The secret may be for people not to straddle others with their own notion or idea of morality. While it may be true that some married persons do use hotel getaways for trysts and shenanigans, humans are naturally wired to pursue happiness and fulfilment and if they happen not to find it in their home or marriage it is almost natural to seek this happiness elsewhere. The point really is, the hotel industry and business must be seen as providing an important service within the economy, jobs, entertainment, accommodation for stranded persons who are traveling out of their home base for one business or the other, to then turn our noses at people who patronize hotels when they need to is a faux morality that needs to stop.

So, I’m sitting here writing this and hoping that if I ask this Yoruba mummy beside me where I can find affordable hotels in Lekki she isn’t going to raise an eyebrow at me and question my home training.
Travel/Tourism