How to Make it in a Breathtaking Economy 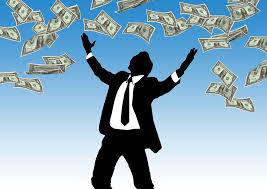 Achieving success in life is craved by all and sundry from anywhere in the world but diverse factors within and outside the individual can scupper the so-called dream. By the virtue of birth, some people has lived long enough on the face of the earth without knowing bitterness (financial breakdown) while the latter part of an individual strives day and night to make ends meet regardless of their helpless state.
Note, the concern here is not the silver-spooned fellow but rather the less privileged who has no option to choose from when the economy floats progressively or retrogressively. It is thus essential to challenge the less privilege due to their disadvantaged position to survive in a "breathtaking" economy.
It is no longer news that handy work combined with distinct creativity served as the only way out of unemployment, poverty and its antecedents. This is sequel to say, individual skill/talents/ is the only tool that can salvage them from slavery where government feels little or no concern for them.
Surprisingly, the callings or interest of sons/daughters of the same womb might not necessarily be the same. Thus, it is advisable to pursue your passion without minding what someone else wants you to do. Practically, the veteran African legend FELA ANIKULAPO KUTI is an example whose vested interested was in music amidst her parents’ wish of a medical doctor. Am quite sure, if Michael Jackson (WACKO JACKO) had delve into acting movies he wouldn’t be celebrated as he was in his lifetime and thereafter.
Nevertheless, making it a breathtaking economy needs more than just the skill as environment comes to play in determining the extent of achieving success by the intending ones. It is a necessity to have a strategic plan with the available resources (cash and material) in order to achieve desired goal amidst the unfriendly environment. The significant trait that ensures the utilization of this goal is simply individual distinctiveness in form of innovation and discovery. A perfect example is the wave of social media networks experienced in the world today e.g. Facebook, WhatsApp, Twitter, Instagram, Instachat to mention but a few.
Besides, where the government has a negligence attitude towards unemployment issues it is a necessity for able bodies to seek a way out for their sustenance and survival. It is thus paramount to live the life of an entrepreneur as that’ mars the differences among the nations of today.
Having noted all the odds as against the positives, it is expedient to wish you well as you get into your dream world and making it a reality.
For more inquiries; follow our updates on ENTREPRENEURSHIP or email us directly at [email protected]
THANKS