Another Chance for Ijebu State to Come to Life; Take it Now or Wait Another Decade 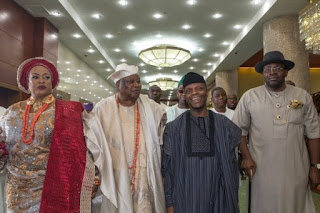 As earlier highlighted on this blog, Ijebu-Ode the most popular pillar in the region of Ijebu as at today lack certain basic elements capable of scuppering the long desired cry for Ijebu State. The cry for Ijebu-State is apparently not a new desire by the Ijebus as it dated back to the reign of Ex-Presidents; Olusegun Obasanjo, Umar Musa Yar'adua, and Goodluck Ebele Jonathan. In this present dispensation "Buhari's"; the bid, urge and the cry for Ijebu-State remains at a low ebb because the challenge "economic turbulence" they met superseded their expectations and preparations.

RELATED; Why Ijebu-Ode will not Experience Desired Development Anytime Soon
Worthy of note, all fingers pointed to former President Olusegun Obasanjo - a typical Yoruba man who controlled the realms of Nigeria's affairs for 8years (thanks to a truncated third term bid) without significant efforts on the development of Yoruba State "LAGOYOSUN"- Lagos, Ogun, Oyo, Ondo and Osun  compared to the Northerners who were highly spirited and concerned for their region and whosoever that hails from there.

Even though Obasanjo fails to grant/acknowledge the wishes of the Ijebus, he has left the whole nation with an eternal gift worth remembering "free flow of communication". However, having lost the bid for Ijebu-State under two consecutive governments - there lies another opportunity for the state's wish to come to life. As we all know, the incumbent President of Nigeria "Muhammadu Buhari" has been battling with his health for quite a while now, in his stead, our very own Professor Yomi Osinbajo has been representing him within and outside Nigeria.

On a democratic note, Professor Osinbajo should be the rightful heir to the throne should in case Mr. President kicks bucket but for an ethnocentric or political reason - power can be shifted from Professor's nose if adequate care is not taken. This plan is simply democoup in nature i.e. coup in a democratic government.

READ ALSO; Shocking Deeds of Notorious Armed Robber in Ijebu-Ode
In light of this, massive support for Professor Yomi Osinbajo from all and sundry (especially the Yorubas) should Mr. President finally dies can give Ijebu State another chance to come to life. Nevertheless, to ease off the stress of bidding fruitlessly, such issues highlighted on Why Ijebu-Ode will not experience desired development anytime soon should be taken serious coupled with the challenge of other regions.
#IjebuStateAlmostHere
#IjebuMustDevelop
#Ijebu-OdeThePillar
politics