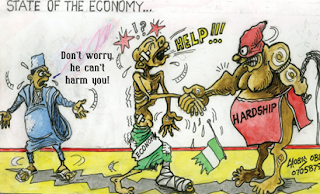 Significantly, the signs are highlighted below for further discussion;
RELATED; Why Economic Recession Thrives Longer than Anticipated in Nigeria
Fluctuation Effect
Economic recession still dwells in a country when fluctuation effect sets in on vehemently everything. This is a confirmation that the economy is not yet in a state of equilibrium. As such, the prices of goods and services increases, reduces a little bit, rises up again and again - this is just the trend/pattern.
The fluctuation effect can also be noticed on the exchange rates in comparison with other core nations. At the beginning of the economic recession, everything business turns upside down thereby leading to significant skyrocketing of exchange rates. As the situation persists, the exchange rate will fluctuate either higher or lower without falling back and moving closer to its' former rate prior recession. This is the case of Nigeria today.

Currency Value
The currency of any nation is arguably one powerful tool for ensuring buying and selling of any goods and services - nationally and internationally. Whenever economic recession sets in, the purchasing power of such country's currency ($, €, £, ¥, N ) falls i.e. the value prior recession was stronger than what it is during the recession. The living example is the amount they sell foodstuff during former President - Goodluck Ebele Jonathan's tenure compared to the incumbent President, Muhammadu Buhari's term.

Cost and Standard of Living
The cost of living during the economic recession in Nigeria is apparently high, in fact higher than the period before, no doubt about that. This is, therefore, justifying the fact that everything is on the high side during the recession. Everything here includes EVERYTHING edible as well as services too.  In essence,  people struggle to make do with their basic needs - especially food and clothing - in order to sail through the breathtaking period. So, therefore, the standard of living is relatively low in this period.

READ ALSO; Entrepreneurial Options for Making 2017 Count in Recession Period
Poverty and Hunger
Poverty and hunger are longtime conjoined twins used to measure the state of the economy respectively. In this article, recession period simply reflects that majority of the masses are poor and hungry i.e. hunger is at the extreme because the cost of living is high, job opportunities are low, and market men/women are not smiling due to the increasing rates of food prices. Extreme hunger and poverty is a noticeable manifestation of economic recession in Nigeria which also contributes to increasing rate of crime against person and properties.

Consumption pattern
Consumption pattern of people tends to change whenever economic recession sets in. In essence, people tend to consume based on what their purse/pocket can afford regardless of what they want and desire as a good or service. Invariably, serious adjustment plan would manifest when recession sets in. This is the case of Nigeria today.

Personal Savings
The high rate at which individuals save their money is arguably one of the indicators that an economy is booming while the contrary is the case when the economy experiences a recession. It is believed that individual savings will be at a low ebb whenever recession sets in while more cash withdrawals would be made every now and then from the bank due to the loss of currency value. This is arguably what is happening in Nigeria today.
economy