Weighing the Chances of Achieving Secession in Nigeria 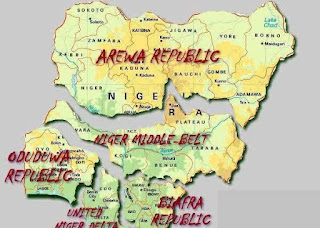 Today in Nigeria, from the East to the North and from the South to the East drums of secession seems to be louder and louder by the day. Among the regions, the paramount advocate of this goal from time immemorial in Nigeria were the Easterners for various reasons under the household name "Marginalisation", "Underdevelopment", "Segregation" and so on.

Lately, as read on naij.com - Adeyinka Grandson (President of the Young Yorubas for Freedom) advocated for the independence of the Oduduwa republic which is also similar to the notion of Opeoluwa Akinola at a press conference held in Lagos. This in itself also corroborates with the insecurity of Easterner's in the North having heard Arewa group declared October 1st, 2017 as the deadline for all Easterner's to vacate the North. For reasons best known to them, the pronouncement has raised another controversial statement implying "the Northerners are tired of tolerating the Easterners" - which is no other thing but encouraging the proposed plan of the region.

However, shutting eyes against Grandson's opinion - it is crystal clear that the Yorubas i.e. Oduduwa group and the Hausa i.e. Arewa group have a cordial relationship for the sustenance and continuity of Nigeria. This itself justifies the low-interest of these groups in the cry for regional independence compared to the divided Easterners - where some are agitating for total independence while some are still sitting on the fence.

RELATED; See Exact Plan Nnamdi Kanu Needs to Achieve More than Biafra's Independence
Nevertheless, as the drums of secession seem louder by the day there lies several pointers that would yield its success or total failure. To begin with, kindly run through these pointers;
POLITICAL MAKEUP IN NIGERIA
The political makeup today under the Action Progressive Congress (APC) is arguably dominated by the Northerners in all nooks and crannies of the Federation. This makeup (in support of few westerners and southerners) is an enough pointer to weigh the success or failure of secession in Nigeria.
As at today, the political makeup in Nigeria stands for Nigeria which is why secession game cannot be achieved. Although, efforts would be made from far and near - which might lead to war - to ensure the much-desired freedom/independence. The end result would still be fruitless leaving the region desolate - loss of life and properties.
In simplicity, the group/region agitating for independence is an insignificant group by statistics in Nigeria which cannot usurp and challenge the power of the current political makeup.

READ ALSO; Why Ijebu-Ode Will Not Experience Desired Development Anytime Soon
WILL OF CURRENT LEADERSHIP
The will and interest of current leadership/politicians in Nigeria spell doom on the agenda of secession in any part of its entity. This will is crucial and incontestable because they have all the wherewithal (human and material resources) to enforce and carry out whatsoever they feel/deem fit for salvaging the continuity and sustenance of Nigerian.
Hence, should in case the will and interest of current leadership in Nigeria support secession then it will be achievable with ease. But the contrary is the case today, which is why Ojukwu led secession stumbled earlier on.

STRENGTH OF CONTENDERS
By strength, the contenders - Nigerian government and whichever region that pursue independence goal are believed to have different strength capable of yielding or supporting their desired goal. Such strength in question are; media strength, manpower strength, financial strength, arms strengths e.t.c.
On all ground, Nigeria as a nation today possesses much more strength than what Biafra or any other region can acquire. Hence, Nigeria will gain tremendously from the fight for any independence while the region will suffer heavily at the expense.

MUST READ; Cogent Things that have Happened to Nigeria After the Demise M.K.O Abiola
LEVEL OF SUPPORT
By support, it is worthy to assume Nigeria has a bigger support at home and abroad compared to any region agitating for independence. More surprising, the region agitating for independence have some sect in itself that is working contrary to the proposed agenda of secession. This in itself will make Biafra's agitation fruitless and disastrous.

READINESS OF THE CONTENDERS
On a readiness note, Nigeria as a nation is very much ready with full-fledged armed forces on all platforms; land, air, water to challenge whatsoever that threatens it's survival (as witnessed in the case of Boko Haram) while the readiness of the group/region cannot be ascertained due at the moment to display their cowardice because they have not display or showcase their power.
politics