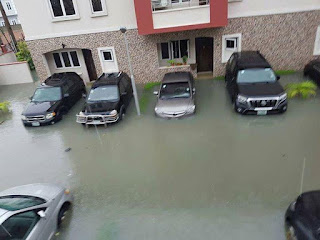 Lagos State today is arguably one of the megacities in the heart of Nigeria due to the massive transformation that had taken place from the reign of Asiwaju Bola Ahmed Tinubu, Mr. Babatunde Raji Fashola and to the incumbent Governor Mr. Akinwunmi Ambode. All administrators - past and present collectively ensured continuity programme by developing the state which has so far yielded tremendous goodies - wealth and popularity on a global scale ahead of other city-states in Nigeria.

In the course of ensuring transformation and development of the areas (mainland and island), a lot of natural resources - water, land... have been altered/moderated without taking cognizance of its likely devastating effect. Of all the resources highlighted earlier, "Water" (river/lagoon) seems to be the most powerful in entirety, capable of ruining whosoever that manipulates it without adequate caution and supervision. This is why major mega cities (China, Japan, Ibadan, Lagos) had experienced different water-driven challenges you can ever think of, especially flood and at the extreme tsunami.

RELATED; Why Ijebu-Ode will not Experience Desired Development Anytime Soon
A living proof of how powerful flood can be likened to the recent outburst in Lagos Island (where cars look like swimming pools, jacuzzi in sitting rooms and roads turned river) which has therefore generated a lot of controversies. Although flooding as a result of rain/erosion is not a new occurrence in Lagos, the recent outburst in Island shocked all and sundry. Some people took the privilege to mock Lagosians and its administrators by turning the scenario to a joking matter, while relatively few can see the occurrence as a normal phenomenon that needs to be addressed urgently by appropriate quarters to avoid a replica of such scenario which can be more dangerous than this.

Invariably, all the water areas in Lagos (Bariga, Lekki, Badagry, Lagos Island and so on) needs to be measured and monitored every now and then (especially during raining season) to avoid a replica of Lagos Island scenario. Can you ever imagine or quantify the amount of losses (human and material) Lagos and its occupants will suffer if the flood occurred around Third Mainland Bridge, or better still all the water areas in Lagos? Invariably, Lagos as a full-fledged State will suddenly live asan unforgettable memory just like the United States of America's 9/11 saga.

READ ALSO; Exact Plan Nnamdi Kanu Needs to Achieve More than Biafra's Independence
Since nature will continue to be nature - rain will always fall in its time (as God decides), the sun will shine and set at the desired time, air would not still seize to blow (special thanks to God for this Grace). As often advised that human being needs to be conversant with the environment he lives for safety and development purpose. It is therefore important for the administrators to ensure the water flow in the area does not surpass it needs to avoid flooding or tsunami.
#EkoOniBaje
#GodBlessLagos
#GodBlessNigeria
politics