With the Look of things Today, this Occurrence Might End the World Soon 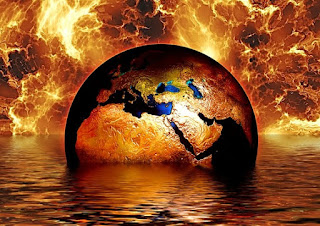 As at today, there seems to be many questions left unanswered that keeps pushing intellectual people to think thoroughly outside the box. So far, regardless of their level of intelligent quotient, thought pattern and the pool of material resources, the result (answer) remains in obscurity. One of the unanswerable questions of the moment is; When will this World end? When will this World stop breathing? or better put, Can this World seize to exist?
*sigh*
I want to believe you have one or two explanation as regards the bone of contention which can be likened to these stages of analysis - theological, metaphysical and scientific. These stages, therefore, reveal the mindset and thought pattern of individuals based on the social realities of today. Some folks linked the occurrence of all pleasant and unpleasant things today to God, some believed strongly that God has no input (because this folk linked any occurrence on earth to man's doing i.e. there is no God anywhere) while the last of all the group lacked the understanding of what's going on (as caused by either man or God) or say they don't have any concrete explanation for the occurrences (either pleasant or unpleasant) in the World they live in.

However, considering this age i.e. current dispensation of ours any occurrence either pleasant or unpleasant is attributed to men's action, reaction and thought pattern respectively. This is so because of the thought pattern as improved tremendously from the theological stage - where things were likened to God's doing. The reality today (or realities of today) therefore demonstrated that man in itself is not just an animal but rather a matured, intelligent and the most brilliant of all the animals in the kingdom.

RELATED; Divine Messenger's Messages to the Sick World
Due to the knowledge level acquired by this man via education, personal experience or inspiration, he has created so many things to make life comfortable in the real sense but in an unintended way contributed to most of the disaster experienced today. In other words, the full consciousness of man has not only helped him develop earnestly in all walks of life but it has also contributed/posed danger to the survival of the World they live in.

As many are busy creating/making lots of innovations and discovery to make life easier to live for all and sundry (regardless of their diversities), some are actually busy developing elements of mass destruction (Ask Kim Jon Un, he knows what I'm saying) for various reasons best known to them;
MUST READ; Bizarre things 21st Century Folks are Celebrating Today
Although this element of mass destruction can make the World desolate, it cannot lead to its' end (because some folks will still be living in it). Several scriptural explanations have made it known that God can end the World through; water, fire, rapture or magic (shutting the World's eye without coming into being). In the real sense today, you begin to wonder what will actually end this World if adequate care is not taken.

Considering the recent wave of happenings, collective errors of man (as great as he is in the animal kingdom) can lead to the end of the World. Stop wondering and continue reading. Against all odds, all pointers seem to be directed at the water-related disaster as a likely precursor that might end the World as soon as possible. This type of disaster comes in different clothing - flooding, tsunami, storm, and lot more. This is so because of the recent scenario in United States of America, Nigeria, China, Japan, Korea (not forgetting the fact that it has been happening from time immemorial).

Due to this, there is an urgent need for all and sundry (particularly World leaders) to have a summit on how to control this menace of flooding (and its accomplice) in order to avoid more disastrous occurrence capable of reducing the World's population within a while. Scholars/researchers in the field of climate change, geographers, environmentalist and other practitioners that matter should look into this case seriously from anywhere in the World for the sake of continuity and development today.

READ ALSO; How a Replica of Lagos Island Flood can be Disastrous in Other Places
Also, a review of all human produce - in form of goods/services capable of harming the ecosystem must be quickly revisited. Above all, national and international hands must be on deck (for World leaders) to design a monitoring team/body to cushion the effect of water-related disaster from anywhere in the globe. This team will have to work together from far and near (research wise) just as the World Health Organization or any other global agency you can think of.
education