From time immemorial, slave trade has been a thing of the Whites against the Blacks residing in the regions of their colonization. In essence, colonization begat the idea of the slave trade with or without the knowledge of Black frontline elders on the consequences for the Black race and its long-term benefits for the White.

On a contrary note, it is appalling, shocking and unexpectedly that a Black race will ever think of enslaving one another for whatsoever reason or benefit in this present dispensation. The case of Libya today is a living proof. Basically, Libya has been one of the richest countries in Africa, at least during the long-term reign of their supreme leader "Muammar Gaddafi". This wealth, therefore, attracted all and sundry within and outside neighbouring African states to Libya. But after the forceful dethronement and death of this supreme leader "Muammar Gaddafi" on several pressed charges nationally and internationally, Libya has hereby faced serious turnaround in their economic fate and political space. This is a likely pointer to why Black slave trade thrives in Libya.

READ ALSO; How Consciousness Can Free Nigeria from Slavery in Contemporary Times
Noticeably, the source of revenue generation (i.e. natural/non-natural resources) for Libyan are been severely contested with by its occupant - where the majority were non-Libyans such as Nigerians, Cameroonians and so on. Also, considering the harsh global economic condition, survival of the fittest now become the order of the day. Hence, the quest for survival by the Libyans with physical strength guided with arms and ammunition is a pointer to the case of the slave trade in Libya today.

Worthy of note, the act of Black slave trade in Libya would not have been this severe if not for the rich receiving hands from all over Europe in exchange for any goodies (cash and its accomplice) much desired by the slave lords. Besides, the current administration of Libya should also be held accountable for all these inhumane treatments. This is apparently because such case would not have escalated in this dimension without the support of the government. In essence, this is a strategy adopted to put away neighbouring Africans from their soil (remember Ghana must Go saga).

It can also be established that the treatment of slaves (who are arguably refugees in the town) in this present dispensation now escalates beyond measures (where most were hanged, tortured and beaten severely) compared to what Blacks in African region experienced in the hands of the Whites. 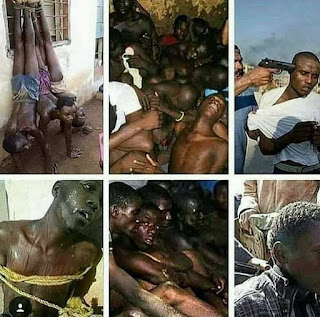 These act, therefore, makes it imperative for all and sundry (Libyan government, other African leaders, non-governmental organisation and so on) to attend to this course practically and bring justice. With this Libya case, Whites will forever wish table does not turn against them.

MUST READ: Why Venture into Things that Threatens your Freedom

I, OBILEYE Abolaji Adewale join the rest of humanitarian in the fight against slavery in Libya. On behalf of the entire staff of Realities of Today's Blog, we;
#SayNoToBlackSlaveTrade
#StandForHumanLiberation
education politics