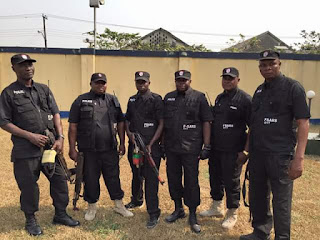 Without mincing words, corruption among youths in Nigeria today is currently at its peak. An average Nigerian youth today believes they have to cut corners before they make it in life. This belief has resulted in crimes of different kinds among the youths - where cyber-crime called yahoo yahoo is the most common of all. This crime according to those involved requires serious intelligence as they relate to people - often called "clients" on the Internet. The rapport usually starts on a friendly note but after a while, several lies/pretence comes into play in order to extort money from the party abroad.

In the quest to curb these crimes at least because there is no crime-free society, the Nigerian police created a special unit saddled with the responsibility of curbing this act among youths. This unit was tagged Special Anti Robbery Squad (SARS). At first, when the unit began operation, they were as effective as the Economic Financial Crimes Commission (EFCC) of Obasanjo. But after a while, the special unit began to play a supportive role in breeding the act of yahoo yahoo by demanding money from among others. Against all odds, SARS has been able to ameliorate armed robbery, kidnapping and cattle rustling to an extent.

Regrettably, the force has also been accused of extreme harassment, brutality, intimidation and murder by the general public which later wheeled in the #EndSARS campaign. It was convened by one Segun Awosanya who does not want the treatment of SARS operatives to birth a revolution as a result of the molestation an aggrieved person suffered at the hands of the SARS personnel. The campaign has kept the social media awash and still among the trending posts on twitter as they strongly believe that it's the sure way of putting an end to their excesses. The IG has to bow to the campaign, ordering the restructuring of SARS nationwide as well as the investigation of the allegations levelled against them.

MUST READ: Five Places Knowledge Can Be Easily Acquired in Life (No. 3 Will Surprise You)
What I think about this "revolution" is in two ways; one, if it is scrapped as the public is clamouring, it will breed more of criminalities i.e. criminals would go into their business full time. On the other hand, if the restructuring of the unit is considered, it will help curb the operatives excesses. Majority of those supporting this campaign, aside from the prominent persons, are of a questionable act. I understand that not all those that carry a laptop around are cyber scammers; some are graphic designers, journalist, computer engineers and so on. But the fact remains that the majority of these cyber scammers do not use laptops anymore, they now use smartphones. Some do not even carry their laptop around, and they carry out their activities in their closet while walking around with their unsophisticated phones.

Due to this distinction, I want to believe (considering restructuring) this unit should be reformed, re-orientated, re-programmed and revitalised without any interference. In doing that, there is also an urgent need for a secret watchdog to ensure conformity to the paramilitary laws and principles. This double-decked action would go a long way to erase the negative feelings the general public have about the Special Anti Robbery Squad (SARS) in Nigeria at any level.

Considering the popular Yoruba saying "he who does evil gets easily pricked at the sight of law enforcement agents", there is a need to retain the SARS. This is so because if someone does not have anything against the law, s/he will willingly submit himself to be checked to avoid unnecessary harassment either verbal or nonverbal. SARS operative tends to carry out the job they are paid for but when anything tries to stand in their ways, it results in violence and this usually bounces back at the armless victims.

READ ALSO: Why Adopting Yahoo Boy's Lifestyle is ALL you Need to Win Big in Life

The brutality and vicious act of SARS personnel has, therefore, made them lose respect and dignity before conforming youths and even the presumed criminals "yahoo guys". Due to this campaign against their heinous act, the intervention of the Inspector General of Police is rather commendable. He noted that its high time the SARS unit is reorganized with a strict new training program on core police duties, respect for human right.

In order to solve the problem created by this campaign, the Nigeria Police Force public complaint has announced the opening of channels through which the public can report complaints about SARS. This should be given a RAPID RESPONSE so that Nigerians can trust them on their words.
crime