Play these Political Cards and Smile Eventually After 2019 Election 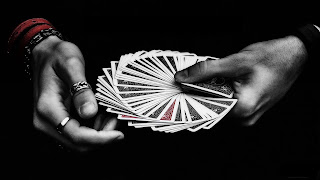 As election year draws closer by the day, incumbent officeholders and prospective ones are busy applying various strategies to win the soul of voters “the general masses” in Nigeria. Whether or not the general masses are beneficiaries of this particular government, their collective voice “vote” has the power to either retain the stone or move it completely.

In essence, there are several cards that can be played by the general masses to enable them "smile" after 2019 electoral processes. Such cards are worthy of discussion considering the controversies surrounding President Buhari’s administration and his second term bid.

In the midst of plenty cards, it is advisable for the general masses to:
MUST READ: Why Innocent Killings Will Not Stop in Nigeria Today
Getting Permanent Voter's Card

Basically, the first card worthy of playing as a Nigerian is to obtain a permanent voter’s card in the course of exercising one’s right and determining one’s preferred political leader ideally. Without permanent voters card, all the rants on social media and physical discussions about the current realities of Nigeria cannot be turned around for good. Get PVC today.

Exercising the Power of the Card to the Brim
Having obtained the permanent voter’s card, it is also worthy of reckoning that the exact purpose of the creation of the card “for voting” must be exercised amidst other latent functions – banking operations, physical verification and so on. It is hereby suggested that voting should be the paramount reason for collecting PVC - to simply determine the fate of who rules at the expense of others. Use your PVC appropriately.

Sensitization on the Need for Voting
This card is quite necessary because the majority are fed up with current structural realities in Nigeria as against the past glories. Due to the current political and economic mess, some folks have vowed not to exercise their right to vote. Such feelings will not turn things around for good but rather continually leave things in the hands of the supposed "bad" leaders. This is where sensitization comes in - to change any government worth changing. This sensitization card is also very important because low-turnout for elections can give room for electoral irregularities which can be incontestable based on the government in power and their proposed will to continue. Hence, the turnout rate of voters is key for determining who is likely to triumph in 2019 electoral race.

READ ALSO: Why the Economy of Nigeria Remains Stagnant Today
Stomach Care Plan
This card has often been a culture in Nigeria's politics. It usually manifests in various ways – empowerment programs, public distribution of cash and food items in any political meetings (as election-year draw closer). I would say accept any stomach care plan tabled before you without any form of oath not because you want to sell your votes but because you are taking your share of the "stolen" national cake.

Get Involve
This card “Get Involve” is not a new card to the updated minds. It is a card imploring people “youths in particular” to get involved in political affairs. In this case, the Get Involve card is channelled towards electoral process – registration, voting, collation, and counting respectively. Hence, all these stages of electoral processes need proper monitoring to avoid any electoral irregularities capable of scuppering the chances of a better political candidate.

Watchdog in the environment
This card is quite crucial for determining the possible outcome of the entire voting exercise - to prevent electoral irregularities by either the officials in charge or the voters respectively. The results of the election would, therefore, be with little or zero level of malpractices based on the number of voters in the polling booths, their votes after counting, when there is a watchdog.