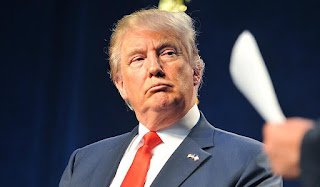 The name "Donald Trump" as it is today rings a bell and commands respect from anywhere in the World due to the seat occupied by this person and also because of his demonstrations/drama/pronouncement before, during and after the election processes. Without exaggeration,  President Donald Trump remains one of the controversial leaders the World has ever seen - alien to the history of America itself.

As every born individual (Slave/Freeborn) has certain qualities (inborn/cultivated) best used to describe them, such is the case of every leader/ruler in any country respectively. Some leaders are CCD in nature i.e. Cool, Calm and Diplomatic, some are friendly and destructive, some are cunning and deceiving to the core (just like the popular China leader Zhuge Liang nick-named "Sleeping Dragon") while some are very aggressive even in a democratic terrain.

As it is now, a short recap of Donald Trump's drama from his days as an aspirant up until this current time has a reflection and demonstration of different qualities he possesses. There is no gain saying someone is diplomatic when all of his action reveals more than what diplomacy could absorb. To an extent, any leader that assumes office in this age needs to be able to adapt to a different kind of weather (situation) due to waving demands of the position.

RELATED; Why Trumpism Ideology will Harm Americans Unexpectedly
Due to the basic qualities necessary for the smooth running of the states internally and externally, it is therefore necessary to streamline the bone of contention to Donald Trump's case. By age and stature, the incumbent President of United States of America meets certain required criteria but on a practical note i.e. governance. There lie certain qualities of Donald Trump that won't make him achieve the desired result.

Those qualities are highlighted below;
Above all, Donald Trump has therefore demonstrated that he lacks the political know-how due to his shallow experience in the political game (he has always being business man) prior his engagement to lead the United States of America. However, unless he looks back at the way and manner his leaders have practically run the administration (which I doubt might not occur because of his ego), he might not leave the office with the desired result.

Without mincing words, I implore you to see the discussions of his qualities and how it won't make him achieve desired result.

BELIEF SYSTEM
Belief system as used in this article does not have any attachment to religion or race but rather on how the individual interprets and reacts to people's opinion about governance. In this case, President Donald Trump believes too much in himself and also in business oriented people (which is why majority of his cabinet are stinkingly rich) giving little or no regard for any other folks that are political in nature. Although, it is believed a President should be able to make decisions on his own but not in a way that will seem like a verdict - in a democratic terrain.

AGGRESSIVENESS
Being aggressive as a quality is not the best approach to relate with people on any particular dealing (business, politics, religion...) day in day out because of what its opposite, "calmness/composure" is capable of in the pursuit of the desired result. In the case of Donald Trump, it can be easily noticed that he is aggressive to situations - reflective in his daily twitter rants, reactions to other World leaders activities, and managing the affairs of the United States of America.

OPEN BOOK
An open book quality is apparently not a good habit precisely when one attains a height in life - where power is at play. It is believed that an individual who desires to soar higher in any game must incubate within himself certain things - strategies, tactics, or techniques - that would ensure the actualization of the desired result in the game. Apparently, Donald Trump of today (can't say tomorrow) lives as an open book which will not but make him predictable and prove his aggressive efforts fruitless.

MUST READ: How Consciousness will Free Nigeria from Slavery of Today


ETHNOCENTRISM
Ethnocentrism - the feeling that one race/culture/belief is stronger/better than any other person's - is basically a good feeling on a personal note but could not be necessary when the dealings of an individual revolve around different faces in a particular jurisdiction. It is crystal clear that the United States of America incubate in itself (as at date) various people from various continents in the World for various reasons (political, economical, educational...) best known to them.

Why will a leader of such nation/country administer on an ethnocentric note? I want to believe it's apparently not a necessary thing to achieve the desired result. Hence, Mr. President should carry that ethnocentric heart without letting it out by utterances, actions, and reactions but rather strategically.

DIPLOMACY
Diplomacy lays emphasis on a sound global relationship (on various affairs; business, politics, education...) among neighbouring countries and other ones outside its jurisdiction. In this case, the way and manner Donald Trump's administration goes about his diplomacy would lead to nowhere desirous - (because of his aggressiveness) by leaving an eternal scar in the history of the World.

SAYING MORE THAN NECESSARY
Action they say, speaks louder than voice.One should therefore act more and say little for strategic purpose.
In the case of Donald Trump, he prefers to ditch out warnings,instructions and even gives replies to any threat to his administration from all and sundry repeatedly before he finally acts upon such. However, true power lies in he who says less than necessary - because such people can't be predictable.

STRATEGY
By strategy, Donald Trump himself is not strategic enough on a political note. This is so because of the way and manner he handles situations, actions and reactions to matters at hand. Due to his lack of strategy, he has therefore joined the league of governments today, living to play the blame game.
politics