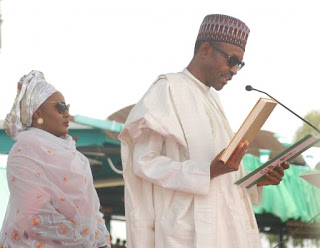 The comment made by President Buhari on her wife “Aisha Buhari” interview with BBC has been a bone of contention lately within and outside Nigeria (Washington Post). In case you never heard, President Buhari of Nigeria pronounced that “My wife belongs to the kitchen and the other room” in response to the interview her wife granted with BBC revealing her opinion come 2019 due to the economic state of Nigeria while he was in Germany beside Chancellor Angela Merkel.

READ ALSO; GIST GOVERNMENT (GSQUARE)
Considering the African race, the belief is a perfect description of their woman. But, considering civilization where education and its antecedents is not streamlined or segmented to one party (precisely the male), the reality is just the other way round of the African mentality.

How on earth will a number one citizen of a nation jokingly make such a public declaration about an highly educated woman (see wikipedia) in this age of globalization. Can you ever fathom the life of any of the woman aforementioned if it had been restricted to kitchen and other rooms? May be you need to agree with Reuben Abati piece on “The Evils In Aso Rock”, alongside Femi Fani Kayode (FFK) piece on “The Problems Faced By Power Holders In Nigeria”.

On a realistic term, a woman should have no difficulty or say deficiency to be sidelined in any realms of this world today (political, economical, educational, technological, and social). A male dominated tend to keep them at bay with relatively few intelligentials agitating for women's total freedom. Sequel to say, a woman can do exactly what a man has the same capability (if not more).
#Embrace Gender Equality#
#Embrace Sanity#
#Embrace Life#
#GOD BLESS NIGERIA#
education news