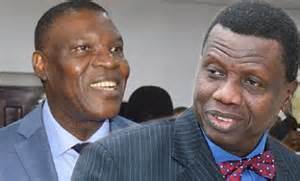 Religion and Politics from anywhere in the world (Nigeria inclusive) has never been for once "dissected" or totally independent from the other i.e. religion influences politics either negatively or positively and vice versa. The practicality of the aforementioned cannot be underestimated due to the accounts, records, happenings and scenario in the world today.

To mention but a few, is it the;
Another unexpected/unanticipated rapport between religion and politics is attached to the recent action of the General Overseer of Redeemed Christian Church of God (R.C.C.G) home and abroad in person of Pastor Enoch Adejare Adeboye. The much celebrated G.O personally decided to step-down (something difficult for Jahmeh Yahya of Gambia) as the Overseer of Nigeria's - the source of the globally recognized church to Pastor J.O. Obayemi. This sole act has brought about lot of controversies.

Obviously, the act was a commendable one by the general public without any trace that such could ever turn to law. Reactions by the Federal Government of Nigeria (FGN) to the news leaves many people in stitches - henceforth, the law states that the G.O seat of any religious organization should not be occupied by an individual for more than 20years - Pastor E.A. Adeboye Legacy.

Nevertheless, this new law has brought about raised eyebrows amongst intelligentsia (general masses in particular) as regards it necessity to all and sundry. Diverse opinion were channeled towards this; some regarded the new law as totally unnecessary (advising FGN to mind their business), some felt its quite a bizarre thing to meddle with the sacred body's activity (pokenosing into the religious affair).

In light of the law passed, it is thus envisaged that a related law (on political office holders) should be passed to protect the right of people as well as the goodwill of the land. Practically, the new law should say all office holders (political in particular; executive, legislature and judiciary) be weighed and measured by the general public at exactly 2years in office. If any is found wanting, befitting punishment in the interest of the nation should be passed without any sentiment.