Eight (8) Natural Gift that Comes with Harmattan Season in Nigeria 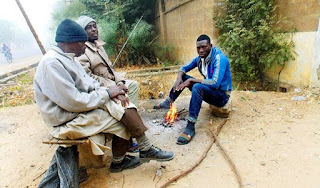 Naturally, every 365 days has its peculiarity, depending on the month and  God's preferred timing. Such seasonal changes have different specificity, based on the region, country or the continent in question e.g. Spring, Summer, Fall, Winter and so on. However, the basic seasonal changes in Nigeria are Rainy season, Dry season and Harmattan season, which is a subunit of the dry season.

By nature, these periods come with both pleasant and unpleasant gifts for human beings irrespective of their profession or location. This is the reason human beings never stop complaining when it comes to any season. For instance, when its' the raining period they say it is disturbing their activities while the farmers amongst them would be grateful for their plants and animal. In the dry season, majority keep complaining of scorch that follows the sun. In essence, this supports the notion that human wants are insatiable.

READ ALSO; How to Save People from Committing Suicide in a Breathtaking Economy
Regardless of the human complaints, God's gift per season still continues to manifest in due time. The case of Harmattan is never an exception because its gift cannot be underestimated for human survival. Such natural gifts are;
Now emphasize a little on each of the aforementioned effects of  weather changes.
Dust
This is simply the number one gift that comes with Harmattan season. It comes into one's apartment - room/office without given any official notice in as much as air is still in operation. In essence, clouds of dust is one thing to cope with when harmattan season arrives. The basic survival strategy here is constant cleaning and monitoring of the environment.

Cold
Cold is a usual order during the harmattan season. This is understandable because of the nature of the season. It is excessively cold for people in this season - which is why some people don't even bathe at all in the morning while some prefer to bathe with hot water and later supplement it with hot tea. Others survive by wearing sweater, socks and gloves depending on where they work and their position at those places.

MUST READ: Four Medical Conditions that Needs Constant Care than HIV/AIDs Today
Cough, Catarrh and Sore Throat
Cough, Catarrh and Sore Throat (CCS) is also a result of every harmattan season. The reason is not far-fetched because of the flying dust and excessive and uncontrollable wind. In essence, when harmattan season arrives, the three musketeers "CCS" are paramount accomplice which drugs will have little or no impact on.

Air Condition
The air during harmattan season is always conditioned with both fan and cool, but the bitter thing here is that the control button is not made available to anybody except God. My trip to Kaduna as far back in 2016 gave me a clearer picture of how air is conditioned in harmattan period differently based on locality. As at November that year, the natural air condition as a result of harmattan was High Cool in Kaduna environ while people in the South Western part - particularly Ogun were still lingering for the harmattan season with fluctuating element of its nearness.

Dryer
This is another rare gift that comes specifically with harmattan season. This gift dries off vehemently anything dryable in human, plants and even animal. In human, it dries of their skin (not to death) giving them a whitening look and a wrinkled skin if adequate care is not taken. In plants, it dries off their leaf and usually leaves them with no fruit to bear. The way harmattan season deals with a human is nowhere different from its treatment of animals. During harmattan, clothes (or anything) washed out gets dried faster than the magic sunlight does.

IMPORTANT: Reasons why Mr. President and Co. Seek Medicare Abroad
Pregnancy
This is basically a top priority of the list of gifts highlighted with harmattan season. In this season copulation "sexual intercourse" becomes rampant between human beings and even animals in the name of cushioning the excessive cold - just like the rainy season. As such, be cautious of your sexual actions in this season because of the cold or else pregnancy would just knock on your door.
Health