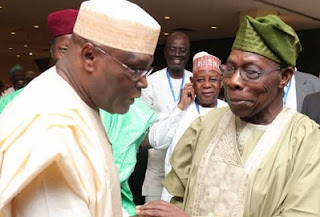 Writing a book for public consumption is a remarkable thing to do but documenting an autobiography requires a lot more thoughtfulness, consciousness and sagacity. These criteria are quintessential in all writings though, just that pouring down thoughts about other people "without holding anything back" can be very disastrous immediately and subsequently.

Former President Chief Olusegun Obasanjo published a three-volume book titled "My Watch" explaining a different aspect of his life prior military, during military and in his time as the number citizen of Nigeria. The book published as far back as the year 2014 received so much publicity, critics considering the tireless effort towards Nigeria's development.

READ MORE: Do these things to Smile After 2019 Election
However, the excerpt of the book also highlighted briefly and described the personality of some big politicians in the country, including his then Vice President. About him, he said:

"What I did not know, which came out glaringly later, was his parental background which was somewhat shadowy, his propensity to corruption, his tendency to disloyalty, his inability to say and stick to the truth all the time, a propensity for poor judgement, his belief and reliance on marabouts, his lack of transparency, his trust in money to buy his way out on all issues and his readiness to sacrifice morality, integrity, propriety truth and national interest for self and selfish interest".

Taking a closer look at the choice of words used, it is glaring that all arrows point at corruption. Invariably, the statement is not just a statement but rather a validated opinion of his. Without mincing words, there are notable lessons from the time the book was published through the year 2018 and 2019 respectively. The following are highlighted;

RELATED: Fact Surrounding President Buhari's Second Term Bid
"No Permanent Friend, No Permanent Enemy"
This quote speaks volume a lot about the documentation. It is possible the documentation was actually made during the feud between the two parties in power or it was truly the identity of the person in question. Either way, considering the quote above, the excerpts in that book is not necessary.
Coming to think the feud was settled in the year 2018, and the author of the book Chief Olusegun Obasanjo could endorse him as the Presidential Candidate of his former party "PDP" for 2019 election makes me laugh. "I dey laugh" as he said when the former Vice President tries to contest in the year 2010.

The Reach of the Book
Wherever the book gets to, Whosoever that reads it gets and an awkward picture of any big politician painted in it. This in itself goes a long way to affect future opportunities for such individual. I just hope the comments made about the then Vice President doesn't affect Nigerians conviction about him during the Presidential election.

SEE ALSO: How to Live and Triumph in the Nigeria Society, Today
The Authenticity of the Documentation Overtime
During the time of the publication, if by any chance the documentation about any of the big politicians was vague, the then President Chief Olusegun Obasanjo should have been summoned to court for "defamatory of character" with every available evidence. As it is, Change is the only constant thing in life. What if the party tagged as such change for good? What happens to the label? Well, it must be glaring enough to change that mentality from the minds of Nigerians.
education politics